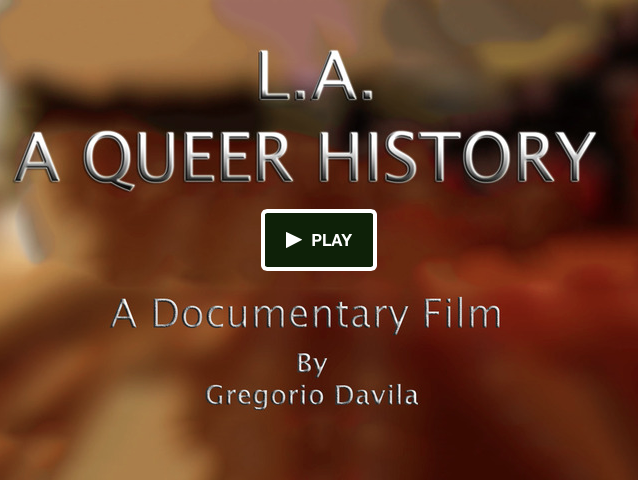 L.A. has a history you've never heard before. A film showcasing 100 years of Gay pioneers who helped shape the community & the world.
Visit our website: laaqueerhistory.com (You can donate via PayPal on website)
Follow us on Twitter: twitter.com/QueerLa
Like us on Facebook:
facebook.com/pages/LA-A-Queer-History/169369526573867?ref=hl
Most consider the Stonewall riots as the beginning of the Gay Civil Rights movement, but the true heart of it began in Los Angeles as early as 1947. And there have been Gay pioneers and artists who have been shaping our community as early as the turn of the 20th century.
The first film of it's kind, L.A. A Queer History chronicles the untold story of Gay and Lesbians helped shape the community, the city and the world. Told by artists, scholars, historians and the people who lived it.
Inception
This documentary began two years ago when I )dir. Gregorio Davila) discovered through articles, books and archival resources, How many Gays and Lesbians in Los Angeles had contributed not only to our civil rights movement, but to the arts in general; whether in early Hollywood, literary, or photography, the Los Angeles Gay community has contributed greatly to the world as a whole.
It also struck me how unknown these people's stories are. How can these amazing contributions from our own community be so unappreciated?
I felt compelled to make this movie.
I presented the ideas to producer Mario J. Novoa. With energy and enthusiasm, we began a long process of development.
Production
Without funding, Mario and I, under Film Bliss Studios began using our combined resources to begin production in May 2014. Why start without funding? Because there was an urgency to capture and document stories from pioneers and trailblazers who are still in Los Angeles. And an even more urgency to capture their stories while they are still with us. Most of our interview subjects are near 80 plus.
The Story
Bringing awareness to the evolution of Gay identity and gender identity throughout the 20th century L.A. A Queer History will explore the sexual eden of early Hollywood, where openly Gay and Lesbian designers, artists and actors molded Hollywood to become the sex and glamour capital of the world. The gender neutral, sexless family entertainment of the early male & female impersonators like Julian Eltinge ruled vaudeville stages at the turn of the century. Eventually crossing into film, Eltinge was widely popular until the Hollywood Production code banned a-normal gender roles on screen, which resulted in the death of these beloved performers of stage and screen. Hollywood being the most influential form of media in our society, public view of “pansy” men went from one of innocent entertainment to "sexual perversion" with criminal and social demonization and the beginnings of the Gay bar raids, entrapment, arrests for “masquerading” and overall criminalization of Homosexuals, which reached it’s peak during the 1950's McCarthy era with the eradication of Homosexuals in the State Department.
It was this type of persecution that compelled Harry Hay to form the Mattachine Society in 1950; the first longstanding Gay rights organization, ONE Inc. to publishONE Magazine in 1953; the first positive pro-Homosexual magazine, and Troy Perry to form the Metropolitan Community Church in 1968; the first Gay church for Gays & Lesbians who had been ousted form the church.

In the late 1960's, Don Kilhefner along with Gay rights luminaire Morris Kight and John Platania, opened the first ever Gay Community Services Center in L.A. Focused on homeless Queer youth and offering services to the LGBTQ community that, due to discrimination or demonization, they couldn't get anywhere else. The first of it's kind in the world, the GCSC, now called the Los Angeles Gay & Lesbian Center, is the largest LGBTQ organization in the world.
In 1970, organizers held the first ever Gay pride parade down Hollywood boulevard to a sea of over 2,000 curious onlookers. Other major cities soon followed suit.
These are just a few examples. In activism and arts, Los Angeles has been at the forefront of the Gay movement for decades prior to the Stonewall Riots. It's time these stories were told.
Purpose
Many Queer youth today are unaware of their history. Term "Gay Pride" was coined in Los Angeles at the first pride parade in 1970., but our youth don't know the context upon which that term was originally presented. It was during a time of great homophobia, not only from society but also from law enforcement. We seek to reinstate that original notion of Pride and give our community something to really be proud about.
Even today there is still great ignorance and homophobia against our community. We are constantly hearing about discrimination, beatings and even murder.
The best weapon against ignorance, is education. And the best way to help the mainstream heterosexual community understand the Gay community better is to help them understand where we come from and how we have not only impacted the Gay community but also the world at large.
We've already begun sharing part of our film as a short centered around Nancy Valverde story called, "Nancy From Eastside Clover". This short which has been selected at QFilms Long Beach (Sept 2014) and The Seattle Lesbian and Gay Film Festival (Oct 2014).

The best defense against ignorance is education.
The American LGBTQ experience is in the public eye now more than ever before: the world is ripe for this history lesson.
Please help us make history.
Production Schedule
OTHER WAYS YOU CAN HELP!
A donation comes in many forms, including SHARES, LIKES, TWEETS, and WORD OF MOUTH!   Please spread the word to your friends or anyone who might appreciate this documentary. We are also interested in community partnerships. Please use the Kickstarter SHARING tools.
If you have time, gear or post-production talents and can donate your time and services, please contact us.
If you would like to host a fundraising event with filmmaker Q&A, please contact us.
Become part of change and community. Let's make this film together!
Risks and challenges

Learn about accountability on Kickstarter

All of our funds have been out of pocket so far, and we're almost done with production. But we have no funds to complete our final round of interviews or for post production.
We need your help!
One of our most pressing situations with LAQH is missed opportunity for interviewing elder LGBT pioneers. What would happen if these voices were never heard?
Our production has had obstacles with commitments from production crew, who have volunteered their time to produce these interviews, but you can only do this for so long. These professionals need to make a living, and if we miss out on their collaboration it could further delay interviewing our LGBT heroes.
Every production needs funding, especially a project of this caliber. Not only are we creating a film but we are archiving hours of interviews that will live on forever. We will be launching out website available to the public for research. Funding will help us continue shooting high quality HD interviews.
Producers Mario J. Novoa and Gregorio Davila have a long history of production, over 25 years combined. They are making sure money and time spent are efficient and in pursuit of the goal to make a high quality captivating documentary about Los Angeles history.
We hope that your trust and belief in our abilities will contribute to the completion of this film. You are jointing a team making a change and shedding light on LGBTQ history.
WHAT WE NEED:
With your support we will be able to finish L.A. A Queer History. But filmmaking is expensive and we need your help to cover the hard costs.
Insurance
Transportation
Film Permits
Camera Equipment
Grip & Lighting
Post production
Color Correction
Sound Mixing
Animation
Festival Entries
Please consider a donation and become a part of the filmmaking fun!
Any EXTRA FUNDS will be used to improve the production value. Every dollar will help finalizing the professional look of the film, and will be matched with in kind-services already donated during the production period.
AND REMEMBER, IF WE DON'T REACH OUR $10,000 GOAL, WE GET NOTHING!
Please help us make history and donate today!! Thank you!!