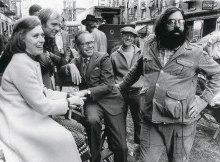 Apocalypse Now star Marlon Brando was "like a kid, very irresponsible," said director Francis Ford Coppola at an Aug. 29 Telluride Film Festival panel celebrating the 35th anniversary of his Vietnam War classic, whose $31 million budget — $110 million in 2014 dollars — Coppola had to finance himself at 17 percent interest, which meant that Brando's behavior could have bankrupted him. The panel, hosted by Scott Foundas, featured winners of a dozen Oscars: producer Fred Roos, editor Walter Murch, cinematographer Vittorio Storaro and writer John Milius.

Since Brando — like co-star Dennis Hopper, who shunned showers and reeked from cocaine abuse — couldn't memorize a single line (yet gave an immortal performance), Coppola recorded Brando improvising for five days, typed up Brando's insightful ramblings along with snatches of Heart of Darkness, put the lines on tape and gave the 300-pound actor an earphone, so he could press a button and recite what he heard. "He didn't have a good memory, that's why he'd say, 'Uh... uh...' and push the button," said Coppola.
Like Brando's finale, the film's famous opening was also a desperate improvisation. "I was hanging out with the four or five editors, just goofing off," said Coppola. Another eyewitness (not on the Telluride panel) tells The Hollywood Reporter, "Francis was drunk, desperate, and rummaging around in garbage cans of film saying, 'I've gotta find an opening scene for my movie!' " Said Coppola, "The 'trim' barrels were filled with film you threw away. Garbage, basically, thrown-away film turned upside down and used to space out the sound on the sound track. I reached into a barrel of this film and at random pulled out a piece of film and put it on the Moviola. It was a lot of smoke, occasionally you'd see a helicopter skid go by, just very abstract. For the hell of it, I looked at another bin of trim and one said 'The End,' The Doors music. I said, 'Oh, wouldn't it be funny if we started the movie with 'This is the end' at the beginning?' So that's a case of destiny or just chance that helped make the beginning of the movie."
The opening scene was punctuated with an explosion in the jungle. "That was the biggest practical explosion ever done on film," said editor Murch. "It was the largest, most expensive military film that was made without any cooperation from the government." Added Coppola, "[Then] Secretary of DefenseDonald Rumsfeld [who later ignited the Vietnam-like Iraq debacle] categorically refused to allow us [military equipment and personnel]." However, said Murch, "A lot of ex-soldiers [from Vietnam] came to advise us, so in a sense it had a different point of view, rather than the POV of the established military."
Coppola praised Murch for the brilliant segue from the opening explosion scene to one of Martin Sheen drunk in a Saigon hotel room whose ceiling fan rhymed with the helicopter blades in the first scene. "I just made it a fan; Walter ingeniously made it a helicopter," said Coppola. "Francis said, 'The film needs to get crazier and crazier as it goes along, and if you work on it for any time, you become crazier,' " said Murch. "So you have the most normal scene, the beginning, because you haven't worked on it yet. The irony is that the beginning is arguably more crazy than anything else in the film."
To make Sheen's character vivid, Coppola relied on a dream. "I had a dream that somehow the key to getting the actor to disclose all that was in him was his vanity. Because Martin was a low-key person, such a good person, a handsome guy, very open, but you sensed that maybe there was a lot more to him. So I started goading him on his vanity. 'Look at yourself in the mirror, you're so handsome, look at your face, look at how beautiful you are,' " said Coppola. "He started to get really weird. He punched his own image in the mirror, and all this poured out of him."
"Including his blood," said Foundas.
But the gory scene was needed, said Coppola, because Sheen spends the rest of the movie passively watching horrors of war, and the audience had to be inside his mind at the start. "This isn't just an ordinary guy, this is a complicated man who's seen things, has stuff in his soul and heart that isn't easy to understand."
Storaro said he was reluctant to shoot the film, because he made philosophical, psychological films likeThe Conformist, not war movies. "I said, 'Don't worry, this is not a war movie,' " said Coppola. Storaro realized Apocalypse Now was about the imposition of one civilization on another, which he expressed by using light and darkness, unnatural artificial colors imposed on natural colors. "It was supposed to be like The Guns of Navarone, but all of a sudden it was about colored smoke and all this weirdness," said Coppola. "I knew it was my chance to take all my principles and put it in this incredible fresco that wasApocalypse Now, good and evil, darkness and light, one culture imposing itself on another."
Telluride Film Festival co-founder Tom Luddy noted that it was appropriate that the Apocalypse Nowpanel and 35th anniversary screening was in the fest's Werner Herzog Theater. "In 1974, I brought Herzog's Aguirre: The Wrath of God to the Pacific Film Archive at Berkeley and screened it for Francis, who used two citations from it in Apocalypse Now." Coppola used homages to Herzog's scenes of a mysterious boat in a tree and a native's spear that goes through a startled conquistador's chest. "I would like to say where this movie came from," said Coppola. "I saw Eugene Jones' 1967 A Face of War, a 16 mm documentary about Vietnam, and that had a profound effect on me. Werner Herzog made Aguirre, and that had a tremendous effect on me."
Apocalypse Now Dennis Hopper film Francis Ford Coppola Heart of Darkness Marlon Brando Martin Sheen Telluride Vietnam Walter Murch