Showing posts from December, 2012
Show all

The Baby Cries - Directing the Rehearsal 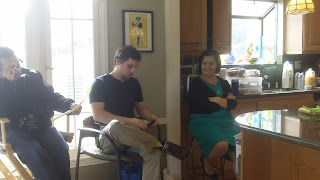 (from left Mario J. Novoa, DP Dan Cotreau and Actor Miriam Peniche. Photo by Sacha Barry)  Learning from previous experiences and allowing enough prep time, I wanted to really pursue the art of cinema from a different vantage point. My primary goals were to allow the actors the space to explore the location we would be shooting in. This would allow the actors to see how best to use and take ownership of their domain. My other goal was to understand how best to use the camera in that same space. I've learned from master filmmakers that allowing yourself to explore the film frame and the performance, would give you the opportunity to shoot what you envisioned. So as we played in the sandbox today, I was able to see all the opportunities. In the next few weeks I will refine what my intentions were and what I learned today. Thanks to my awesome Cast & Crew today!
Read more

December 06, 2012
Really enjoying listening to The Hobbit: An Unexpected Journey (Original Motion Soundtrack) by Howard Shore. It really stands on its own and makes you feel nostalgic. Follow the link to listen to on Rolling Stone's website. http://www1.rollingstone.com/hearitnow/player/hobbit.html
Read more 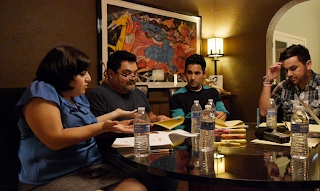 A talented cast and crew embarked on a table reading for The Baby Cries. The Baby Cries is a short film comedy based on a stage play I wrote for CASA 0101's The Brown and Out Theater Festival this year. It is a story of a gay couple raising their newborn daughter and the chaos that ensues when the traditional Catholic Salvadoran grandparents show up. The talented Cast includes: Martin Morales, Miriam Peniche, Matt Pascua and MJ Silva. As the writer/producer/director of the film, it is a proud moment to see the "baby" come alive. The play version generated a lot interest and praise from the audience, and it was great to hear how well people connected to the story. Time and time again people would tell me how they identified with each character - people from all walks of life: gay, straight, male and female. When writing the piece, there was a part of me that wanted the characters to be identifiable with anyone and people did indeed connect to the story of family, trad
Read more