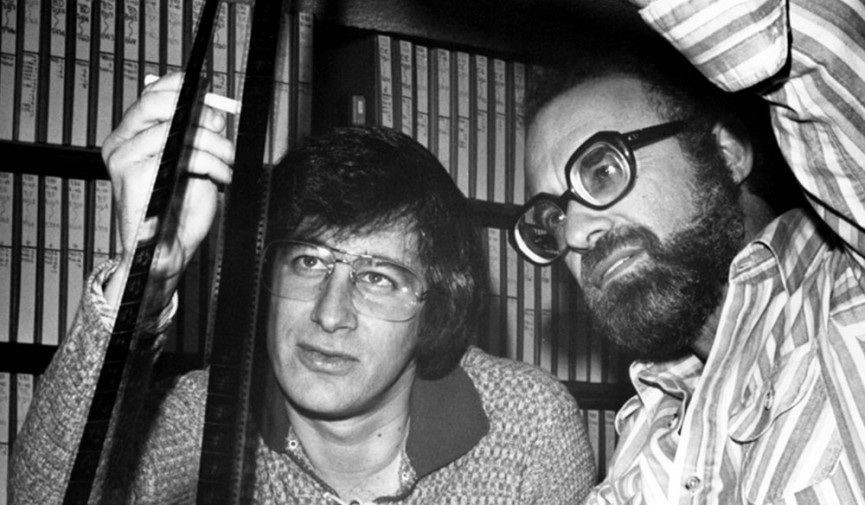 The Editing Genius of Michael Kahn

Michael Kahn is one of the most successful film editors in the business. Here’s an in-depth look at his legendary career.

Top Image: Steven Spielberg and Michael Kahn via Empire Magazine
The most interesting thing about legendary editor Michael Kahn isn’t that he started by editing Hogan’s Heroes, or that he became Steven Spielberg‘s go-to editor. No, the most interesting thing about Kahn is that he never really wanted to be an editor in the first place.
He began his journey working in a New York mailroom and slowly moved up the ladder to become an apprentice. He advanced to assistant editor and finally head editor of the classic television series Hogan’s Heroes. From there his career shot off like a rocket.
Let’s take a detailed look at his classic career, one that made Edgar Wright say:

We were shown a montage of Michael Kahn’s credits. It was possibly the most epic, daunting and yet inspiring body of work I’ve seen at any awards show, technical or otherwise.

Kahn began his career producing commercials for a New York ad agency, but soon found himself working in post-production after being offered a job at Desilu. The production company was owned and operated by the legendary television duo Desi Arnaz and Lucille Ball, but Kahn found himself being essentially the “male secretary” for editorial supervisor Dann Cahn. He became Cahn’s apprentice and was soon urged by John Woodcock to join the union.
By joining Woodcock, the young Kahn would begin working on his very first television show, The Adventures of Jim Bowie. Kahn would say, “It was a wonderful time to be in the editing business because we had fourteen or sixteen shows on the air. Some were comedies and some were dramas.” Kahn would learn valuable lessons at this stage of his career, lessons such as discovering how to manipulate the film to do what he wanted it to.
Video from WesternsTv

By the 1960s, Kahn moved up from an apprentice to assistant editor and began working toward the ’8 Year Rule.’ This was an old rule that editors followed that dictated they had to work professionally as an assistant editor for eight years before they could edit a film or television show as the main editor.

A friend of mine, Jerry London, got a chance to work on Hogan’s Heroes; he did the pilot. He said, ‘If you come with me as my assistant, after the fifth or sixth show I’ll make you the editor.

Jerry London was true to his word. Michael spent the next six years of his career editing over 130 episodes of the classic comedy series.
Video from Manhattan Edit Workshop
From the success of Hogan’s Heroes, Kahn was able to garner attention which led to his move from television editing to film editing. His first film was a drama called Rage, directed by Oscar-winner George C. Scott. Kahn would utilize the techniques he learned as an apprentice (such as the use of slower cuts) to impress Scott so much that he requested to work with Kahn again on his next film The Savage is Loose. This extended collaboration would garner Kahn editing jobs on films like The Devil’s Rain, The Ultimate Warrior and The Return of a Man Called Horse.

Directors started saying ‘hey, that’s an interesting idea, I didn’t think of that.’ And that sort of encouraged me on, then I tried other things – I kept trying things. And directors seemed to appreciate it – Michael Kahn, Editors Guild

By 1977, Michael Kahn was already having great success in the film industry when a young director named Steven Spielberg, fresh off the success of Jaws, came looking for an editor to cut together his sci-fi epic Close Encounters of the Third Kind. Kahn once remarked that cutting his teeth in the fast-paced environment of television set him up perfectly to work with Spielberg, who works quickly and captures a wide range of coverage.
Video from Manhattan Edit Workshop
The result of this collaboration would be multiple Oscar nominations for the film and Kahn’s very first nomination for film editing — an award that he would lose to Paul Hirsch, Marcia Lucas and Richard Chew for Star Wars.
Kahn quickly picked up more work during Spielberg’s down time, editing Eyes of Laura Mars for Irvin Kershner and Ice Castles for Donald Wrye. After these two films, Kahn would see a string of hit films come to him from Steven Spielberg, as well various other directors like Robert Zemeckis, Richard Donner, Frank Marshall, and Tobe Hooper.
In 1981, Kahn would score big with his editing work on Steven Spielberg’s legendary film Raiders of the Lost Ark. He would follow this win with Oscar nominations for Fatal Attraction and Empire of the Sun.

Part of the Oscar Elite

After editing some of the most revered films of the 1980s, like Poltergeist, Indiana Jones and the Temple of Doom, The Goonies and Indiana Jones and the Last Crusade, Kahn would have an amazing run over the next ten years. Starting with 1991′s Hook, directed by Steven Spielberg, Kahn would edit Jurassic Park, Twister, The Lost World: Jurassic Park, and The Haunting.
Video from Manhattan Edit Workshop
Kahn edited two films during this era that would give him legendary status within the editing community: 1993′s Schindler’s List and 1998′s Saving Private Ryan. Because of his ability to effectively craft a story and master the techniques of editing, Kahn would be awarded two more Oscars for both films. In the video below, Kahn talks about the process of editing the opening scene from Saving Private Ryan.
Video from Manhattan Edit Workshop
From 2000 to 2010, Kahn wouldn’t slow down at all, editing Catch Me if You Can, Peter Pan, War of the Worlds, The Adventures of Tintin, War Horse, Munich and Lincoln. He earned Oscar nominations for the latter two films.
Since 2011, Kahn has stopped editing films for filmmakers other than Spielberg, who calls Kahn his big brother. In an article from Flickering Myth, Kahn had this to say about working with some directors:

Some directors don’t like you to edit until they are ready to run it with you; then what you have to say is minimal because he tells you what he wants and you sit there and type out the visuals. But that’s not editing… I want to make a contribution to the film.

So far in his career, Michael has been nominated for eight Oscars, the most of any editor. His three wins tie him with other legendary editors like Thelma Schoonmaker, Daniel Mandell, and Ralph Dawson.

The Editing Style of a Master Craftsman

Michael Kahn recently completed editing Bridge of Spies. He’s also slated to edit BFG and Indiana Jones 5. But his long list of credits isn’t what makes Michael Kahn so great. It’s his attention to the creative process of editing. It’s his incredible ability to know when and why you need a cut or a transition and how to blend the scenes together that made him a legend.
Video from Manhattan Edit Workshop
Kahn also purposefully never goes to the set to watch the production. He’s often said that he wants the film to come to him fresh without any preconceived ideas. He told Cinema Editor Magazine that he doesn’t edit the way he does because he went to school. He says it was the years working as an apprentice and assistant editor that taught him how to be a real editor.

It’s not about knowledge; it’s all about feeling or intuition. Good editors or musicians or directors—what makes them special is that they feel things… Your feeling is what you’re getting paid for. It’s your ability to cinematically touch things.

Get a deeper look into this master editor’s career straight from the source in this great one-on-one interview with DP/30.
Video from DP/30: The Oral History Of Hollywood
Labels: Michael Kahn is one of the most successful film editors in the business steven spielberg