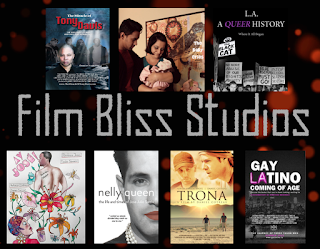 Latino Filmmakers Build LGBT Pride through Cinema
By Joseph R. Castel
As we roll into another Pride month filled with half-naked men on floats, we can take real self-satisfaction in that a growing number of Latino filmmakers are finally documenting Latino LGBT history and culture for the big screen.In the past few years, bio documentaries have been making permanent waves on the film festival circuit.Such films include Jonathan Mendez’s Gay Latino L.A.: Coming of Age, Gregorio Davila’s “Nancy from East Side Clover,” and Dante Alencastre’s “Transvisible: The Bamby Salcedo Story.

“Most people don’t even know that Latinos have been at the forefront of the LGBTQ movement,” says director Alencastre. “They don’t know who Sylvia Rivera or Jose Sarria were.” Alencastre continues, “It behooves us as artists and storytellers to preserve our own history our own way, instead of waiting for others to do so.”

These filmmakers are beginning to leave their cinematic imprint with moving and evocative films that reflect their history, identity and experiences.
Even Christopher Street West (CSW) is taking notice.

On Sunday June 7, CSW kicks off L.A. Pride 2015 with an opening gala & film showcase entitled “A Celebration & Reclamation of Los Angeles’ LGBTQ Legacy” at the Montalban Theatre.Proceeds from this launch party for the Pride Honorees will benefit Davila’s film, “L.A. A Queer History.”

Davila has already won an award for his ten-minute excerpt from his video, entitled, “Nancy From East Side Clover” which will also be screened at the Montalban. The excerpt is about the life of Nancy Valverde, a lesbian who grew up in East Los Angeles during the 1950s.

Alencastre is also embarking on a new feature documentary about Latino LGBT legendary diva activist, Jose Sarria. In 1961, Jose was the first person in the country to run for political office—11 years before Harvey Milk. “Yet, most Latino LGBT people don’t even know his contributions,” explains Alencastre. Although Jose lost the election, he garnered 5,600 votes, proving for the first time that the gay community had a voting bloc.Alencastre believes that Jose probably hasn’t received the recognition he deserves because he was a drag entertainer.

San Francisco City Supervisor David Campos recently held a fundraiser for Alencastre’s film, “Nelly Queen: The Life and Times of Jose Julio Sarria” at the San Francisco LGBT museum in the heart of the Castro. “In many respects, the gay political movement started because of what Jose did in 1961,” claims Campos.“He opened the door for people like Harvey Milk, and I know I wouldn’t be here today if it wasn’t for Jose.”

Producer for Nelly Queen, Mario Novoa, recalls how only a few years ago he discovered that Sarria, not Milk, was the first openly gay candidate to run for office. “I was kind of angry to find this out because I was always told that Milk was the first. Now, I’m working on a film that not only recognizes Jose as the first candidate, but we’re acknowledging all of his milestone accomplishments.” Both Alencastre and Novoa feel that Jose’sheroic drag has long been overlooked as a cornerstone of the gay rights movement.

Filmmakers Jonathan Menendez and Karla Legas Legaspy created a platform for Latino filmmakers with the Latin@ Queer Arts and Film Festival in order to bring stories like Sarria’s to the screen.
Legaspy started out as an actress (Pura Lengua),but for the past ten years has been honing her craft as a filmmaker. She’s making her directorial debut with Gold Star, which was awarded the Latino Public Broadcasting New Media Grant. Gold Star is a story about a pre-adolescent girl who is bullied for dedicating a song to her teacher during the school talent show. Her film addresses the need to create awareness of LGBTQ children within the Latino American community.  Films addressing issues of homophobia often center on teenagers or adults, but the experiences of LGBTQ children often remain invisible. In order to receive her matching grant from PBS, she must raise $9,500 on Hatchfund.com.


Many filmmakers are turning to cyber crowd funding as a way of reaching out to LGBT communities around the world. Nelly Queen’s production team recently raised more than $7,000 in contributions on IndireGoGo from donors all over the country. “Support from the various factions of our community is huge,” said Novoa who also produced Menendez’s Gay Latino and Davila’s L.A. Queer History.“Without the support from our families, friends and LGBT communities, these films would never have been made.”
Show your pride by supporting these groundbreaking films. Visit their websites and find out how you can get involved.