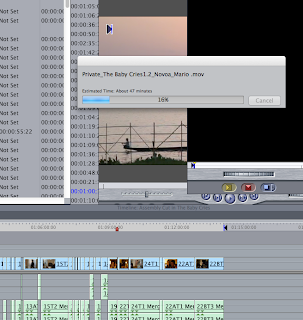 Why would you test screen a short film? Some people wouldn't because it takes time, money, a screening room, a list of questions to ask and courage. This past summer I was able to screen The Baby Cries five months after the first cut was completed. After re-watching several cuts with trusted colleagues, I needed to get a fresh set of eyes and opinions. While you get a sense of how well the audience likes the film by the reactions, nothing prepares you for written notes. The purpose is to hone in on what is not working: a joke, gag, dramatic rhythm, etc. As a writer I try to be aware of what might work on the page, and as a filmmaker I try measure how the words translate for an audience in front of a movie screen. It's akin to a performer gauging their delivery in front of a live theater audience.

I received some interesting insights from the audience and reconsidered some of my approaches as the editor of the film. It's a difficult process because not only did I write The Baby Cries but I produced and directed it, so it literally was My Baby. It was a tormenting process but I sincerely wanted the audience to feel the characters' journey, the story's emotional beats, the actors' performances and theme of the film. Sometimes it comes to your ability to listen to criticism as a filmmaker, and other times it is about measuring your strength. The last thing I want is for the film version of The Baby Cries is to fall flat as a short film; whereas, the stage play was well received in L.A. and Dublin, Ireland. There are also many contributors from the cast and crew that I didn't want to let down, so it was important to re-edit a cut with a slightly different rhythm and strengthening the film.

I have spent a year on the film while I worked on feature films as a producer and attending the Internet Marketing Program at Full Sail University. It was a tough year and a balancing act. We are now moving forward and letting The Baby be one with the world.  Crawling before running. As the The Baby Cries takes its' place on the world stage (via the festival circuit), it will be an interesting experience to feel the reactions of audiences worldwide.